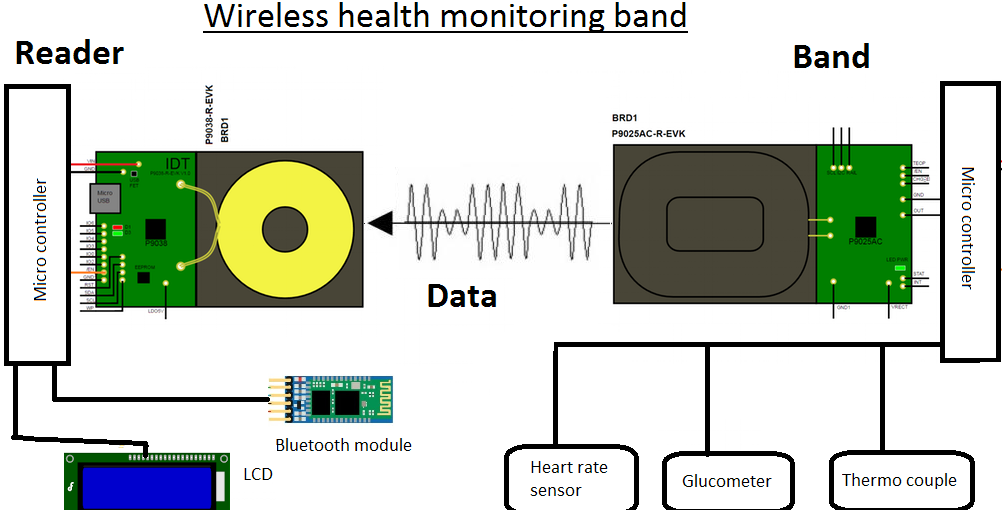 This project has two modules. The band and the reader.

The band will be worn by the patient and the reader will be held by the doctor. The band has sensors to measure patient’s heart rate, body temperature and blood glucose. All these data will be collected by a micro controller(MSP430G2553) and transmitted through P9025AC-R-EVK Wireless Power Receiver module by using the technique of back scattering which is widely implemented in RFID cards. By increasing the load momentarily on the load side, the current consumption on the source side can be altered which can be used for communicating useful information without the need for special antenna system. I have planned to use Biphase L modulation to send the data back to the receiver module. The process of sending data and modulating the carrier is taken care by the micro controller.

In the receiver side, the P9038-R-EVK module plays the role of both transmitting the power and receiving information from the wireless band. The variation in the load can be read by a microcontroller in the reader part can decode the information and get the patient’s data and can display it using LCD or can transmit the data to the doctor’s cell phone through bluetooth.

The hand made sensor has a IR LED and a photo diode pair connected to an amplifier circuit. The IR module is placed over the finger. IR led flashes IR light onto the finger and photodiode converts the reflected light into electrical signal. This signal is amplified and sent to trigger circuit and the output is sent to counter module of microcontroller( implemented in embedded software ) and finally we’ll have heart rate data. 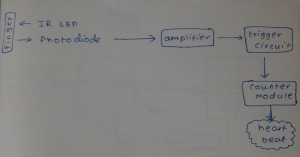 The temperature is measured by using a thermocouple connected to the microcontroller’s ADC port. The micro controller converts theanalog value into digital value and sends to the reader.

Merits of this system: