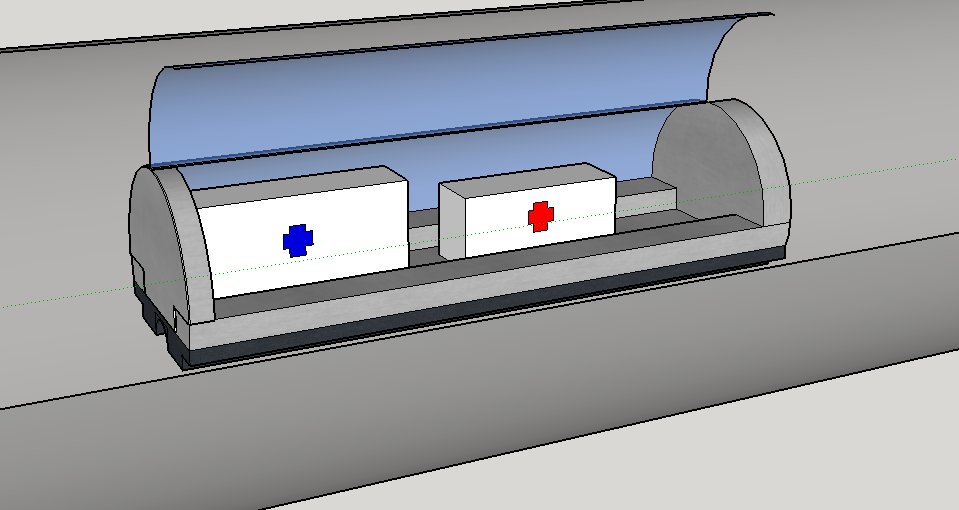 Hello everybody, I would like to present my project.

A big problem of contemporary health care is distributing drugs to patients in hospital wards. Many hospitals are very large, some host thousands of patients, sometimes it is difficult just to navigate inside. Every day, drugs have to be administered to the patients several times. In most cases, the patient is fit enough to take the pill by themselves, but for many reasons they are not trusted with administering the drugs – taking proper doses at appropriate times. It is the duty of medical personnel, usually nurses, to find the pills in the ward’s storage, assign them to patients according to doctors’ diagnoses, and physically distribute them around the ward. There is a lot of room for human error and these happen often. It also takes a huge amount of the personnel’s time every day and creates a lot of mess – patients are often not in their beds when nurses arrive with their medicines. Another problem is that the wards’ storages are supplied from the central drug storage of the entire hospital, and maintaning the supply is a procedure in itself – here the biggest problem is handling the wards’ demand for various medicines.

An alternative system has been developed in the 19th century, called the pneumatic post. In this system, drugs would be packed inside a small cylinder, put inside a pipe sticking out of a terminal, and sucked to their destination using vacuum. Entire hospitals (or other big buildings) would be crawling with tubes connecting their wards to the central storage. The idea evolved for over a hundred years and is still used in some hospitals. The system works also for transporting documentation. The problem is that it is expensive, difficult to maintain, not all hospitals can be adapted to use it (it’s easiest to desing the building from the beginning to allow pneumatic post) and it’s noisy. This is why I devised a cheaper and simpler alternative which is also completely quiet.

My solution uses magnetic levitation and wireless charging. The idea is to build a network of pipes, like in the original system, but equip them with permanent magnets on the inside. Then insead of cylindrical containers, one would use what we could call small maglev train cars – they would have their own power supplies (batteries), a microprocessor (Arduino) and wireless charger board. Together with a small “cargo compartment” with electronically controlled door each such “car” would be a proper container for a system of drug distribution. 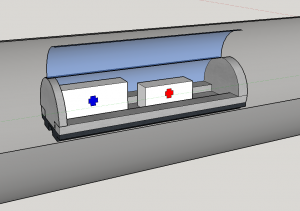 Each car moves by the principle of a linear electric motor – on its bottom, several electromagnets are placed, turned on by the Arduino controller with the current flowing in opposite directions, switching very quickly, so that they would be polarized N-S-N-S and then S-N-S-N, and so on. The switching produces a “travelling” magnetic field, which pushes the train in one direction. It is also very easy to stop or reverse the direction of movement. Keep in mind that the electromagnets only provide the directional movement, not the levitation. Magnetic levitation is achieved with permanent magnets on both the car and the pipes through which it moves.

Using electromagnets only on the car, rather than on the track, makes the system much cheaper, easier to install, and what is very important, modular. Read on to understand the consequences. It is also not that power-hungry, so each car can be removed from service from time to time to a location with a wireless charger, where its batteries are filled. During charging, it is replaced in service by another car, which then recharges and so on. This is a typical ward setup with my system (the charging station is in a dead end at the top): 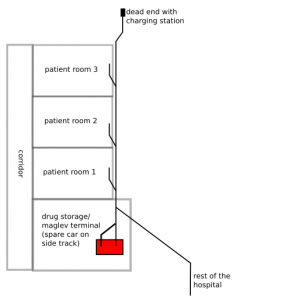 There are several advantages to my design – most of all, its most expensive parts are the cars, giving very little initial investments. Even today, pneumatic post is very costly to implement, as it requires huge machinery to generate the vacuum. Only very big hospitals want these systems, as it’s a “all or nothing” choice – a small pneumatic post system is not viable, as the big cost of buying the pneumatic machinery is not justified. On the other hand, a maglev costs as much as its cars (and the small cost of pipes with magnets, maintenance and logistics software). It is perfectly possible to equip only one ward with it – this would be absurdly costly in case of the pneumatic post. Many hospitals, especially those built in Eastern Europe in the Communist era, are huge rectangular blocks, with one side much longer than the other, perfect for fitting with maglev pipes. While not as fast as pneumatic, it is also very quiet. The only moving part is the hinge for the door of the car, everything else moves by magnetism, so little maintenace is needed. Remember that charging in the charging station is wireless, so no need to replace batteries or plug cables into the car. The charging plate is in the car’s back, behind the hinged door, and the other one is in the side of the pipe in the charging station.