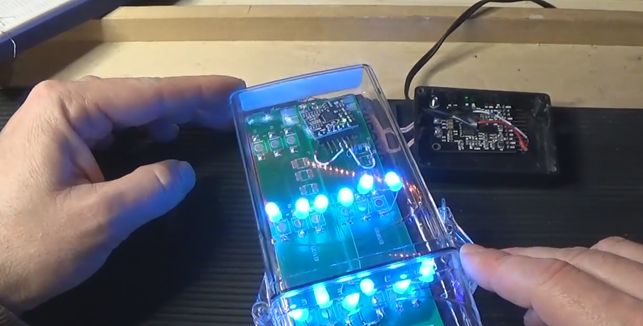 Wireless Power Aquarium allows to have a nice and emotional light experience for your fishes, without the need to have cabling to the waterproof lamps. The lamps are sealed in a waterproof enclosure and are based on LED technology.  An external Wifi Power station provides the necessary energy to supply the lamps outside from the aquarium. The power station will manage, light dimmer, color and special effects depending on the type of fishes.  LEDs can be selected as simple RGB Leds, that can vary autonomously their colors or specific wavelength LEDs in order to feed the plants into the Aquarium and avoid the algae generation. Another application is related to the purification of water, by using Ultraviolet LEDs specific for water purification.

The idea comes for different thinking in what field of application can be exploited the feature to transfer energy without cabling and a direct connection. Water is a very good candidate, because is not a comfortable environment for electronics and in general applications shall be protected against the presence of water. Therefore the possibility to exploit wireless power to supply and feed energy to something that is inserted in water was reputed a good idea. I think to the day by day life and the idea for an Aquarium comes to me first, in order to have nice light effects for the fishes and for people looking to the Aquarium. In order to simplify and to use as much as possible the wifipower I choose a stand-alone  RGB LED set, that by simply be supplied can do the job for us, by changing autonomously its color. Then I think to something more complex, in order to give the possibility to the user to drive the LEDs brightness, wavelength, duty cycles and light combinations effects. To do this I inserted a miniaturized and low power device such as Arduino Nano to drive the LEDs. In addition, in order to drive the Arduino NANO inside the Water an external Radiofrequency transmitter and internal Radiofrequency receiver operating at 433 MHz has been inserted. This Radio frequency was chosen due to low power consumption and very good propagation across water and Aquarium materials

The Wireless Aquarium receiver has been engineered into a PCB with these two possible configurations, by selecting jumpers and different mountings:

Configuration 1 – LEDs always ON: in this case only IDT Receiver and RGB LEDs are necessary. The LEDs are always turned ON. The User can choose the number of LEDs and the type fixed color or RGB autonomously changing LEDs Configuration 2 – Remote LEDs Drive : The User can also drive the status and the luminosity, brightness of the LEDs, by exploiting an on-board Arduino NANO and Radiofrequency receiver mounted on the Wireless Power Receiver. in this case into the PCB the following materials have to be mounted: Arduino NANO and Radio-Frequency Receiver operating at 433MHz. The User will use another Arduino and Radio frequency transmitter to drive LEDs In this configuration the Arduino Nano drives the LEDs in four groups:

The User can felt the magic of having energy into the water without cables, like Nikola Tesla did one century ago….

Official Video in ENGLISH language for the CONTEST

Video of the test and prototypes in ITALIAN language for my fans in my YouTube channel   https://www.youtube.com/c/PierAisa

The Wireless Aquarium is easy to be build and put in service. Simple materials to be retrieved in commerce. Simple to mount. Simple to use.

To have a nice environment in its own house is something that increase the quality of life. Let’s imagine in the evening when there is less light, that you have the water that spread a lot of beautiful colors in the room. Or if you have some container in which you want purified water without expensive systems, you can use simply UV LEDs driven Wireless. 
The hardware is based on a PCB with dimensions 56×80 mm double layers, with the electrical scheme represented hereafter. 
The Wireless Aquarium has the following code modules when used in the  “Configuration 2 – Remote Drive LEDs”:

SOURCE1: WiPowerRx.ino: This simple piece of code drives 3 groups of LED with the following interface:

When the User transmit a single char from the transmitter Arduino based the following behavior happens:

SOURCE2: WiPowerTx.ino : This simple piece of code drives as an example the  groups of LED123 with ON state and mid brightness state

This idea with simple but smart elements, demonstrates the magic of wireless power energy in a day to day application for all people by injecting energy through the water and to take benefits avoiding cables and cords.